This is a very well established and large Children's Activity and Play Centre, and has been in the hands of the current owner for the last 10 years, and was taken over as a going concern at that time.

It is fully staff run and requires very little input from the owner, who has several other business interests and so does not have the time to spend on this business. In spite of that it manages to achieve a turnover in excess of £500,000 and profit available to the owner of around £130,000.

This is undoubtedly a very established and profitable business that still has some scope to expand.
It would be equally suited to an investor who could continue with the business being entirely staff run, or someone that would like to totally immerse themselves in the daily operations of the business and maximise the return on their investment.
The business is a limited company and so offers are invited for 100% of the shares.

Accounts and business name and location will be made available upon completion of our non-disclosure agreement.

The business is located in the home counties, on the edge of a small industrial estate in a market town, which is very well served by local road and motorway networks. It has several large towns and villages with thousands of additional homes planned within easy travelling distance over the next few years.

The premises is a purpose built industrial unit that extends to 1,300M2 (14,000ft2) and was fully fitted out as a children's activity centre over 10 years ago, at which time it was adapted quite considerably from the original basic shell that it once was.

The majority of the unit is the activity area, with 2 play zones, a sports area and a bouncy castle area, there are also seating areas in between with tables and chairs for the supervising adults to use while on site, and where they can consume the food and drinks provided by the on-site cafe.

In addition there is also a reception area, the cafe kitchen and servery, 5 party rooms, toilets and store rooms. There is also a mezzanine area that could be used for further expansion.
Lease Terms:
We are informed that there are 6 years remaining on the existing lease, which is renewable under the LTA 1954, and has a current passing rent of £73,000 p.a.
Reason For Selling:
The current owner has other non-related projects on the starting blocks that he wishes to pursue, and so feels that the time is right to pass on the reins after 10 successful years of ownership. 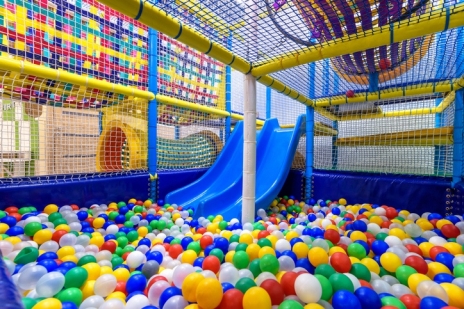